On when it rains in Greece

May 23, 2017
A terrain of dusty mountain tops, lush greenery speckled with brilliant yellow flowers, and rain. Lashings and lashings of rain. You’d be forgiven for thinking I’m describing the view from a train whizzing through the English countryside, but I’m not. What I’m describing is the view from my uncle’s car as he and my aunty show me Greece. Mainland Greece. Authentic Greece. We’re not on the islands anymore.

Our destination? Well, we’ve already had a quick drive by Corinth (while Coolio’s ‘Gangster’s Paradise’ was playing on the radio in the background – one of the more jarring experiences of my life), and visited the beautiful coastal city of Nafplio (a personal favourite), but today, we’re visiting Greece’s winter ski village. Bet you didn’t think one of those existed in a country more known for beach bars, crystal blue waters and ice-cold Mythos beer, hey? (But, legit, it’s all about Fix beer now.)

Arachova looks as if it would be better suited to the Austrian countryside, or some similar Bavarian locale where the depths of winter are its time to shine, rather than the sweltering months of July and August. The lashings of rain mean we dare not venture from the car (I’ve only brought clothes suitable for island life after all), but the slow driving allows a glimpse of a Greece I hardly knew existed. A Greece in stark contrast from what I’ve come to expect after mainly visiting in summer and mainly visiting the islands.

Greece, I’ve realised, is a place of contradiction. A place that is just as cold and rainy as it is warm. A place that for most people offers a sun-baked escape from normality but for me offers more angst than relaxation as I struggle with a language I should know better than English, while staying in my family’s house in the outskirts of Athens, a suburb not unlike something from the third world. A place where the importance and sanctity of history and religion is evident on every street corner, except for the one where a church has been reduced to a street artist’s canvas, the words ‘Don’t believe the hype’ scrawled along one wall. A place that gave civilisation its pillars in which to live, but has now given its people very little to be able to live in a civilised way. A place where I should feel at home, but can never quite relax, one eye firmly on the plane that will take me away. 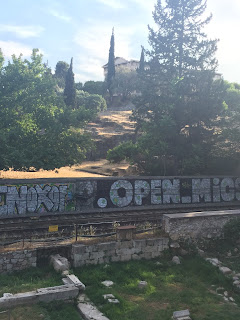 It is also a place that can still surprise me with the richness of its offerings.

During the first day of my trip, my father and I were enjoying quality time together after almost ten months apart. Once we had called home to connect with my mother and sister who though were still in Melbourne, for a moment were with us in Greece thanks to FaceTime, we decided to venture into Athens.

En route, my father mentioned wanting to visit a particular café, and though he wasn’t quite sure of its location, knew he would find it once we walked around the city for a bit (he still operates in pre-Google maps mode). Since I was happy to just be spending time together, I humoured him and trailed along as we roamed the streets, sure this café wouldn’t exist anymore. Besides, the name hardly offered much in the way of high expectations - Zonars sounded like the fortune-teller game from the Tom Hanks film, Big.

But find it we did. And I swallowed my words. The place was gorgeous – it’s where the Athenian elite take their drinks, do their business and be, well, elite. With art deco flourishes and a well curated menu, I was instantly at ease. After ordering a glass of rosé (one of the lightest, most crisp wines I’ve ever had), my father and I chatted. It was then that I discovered the significance of Zonars.

Zonars was the place where my father used to be taken by his father when he was a boy, before the family emigrated to Australia. My grandfather, a man I never met since his death pre-dated my birth, had always been somewhat of an enigma to me, but sitting in Zonars, I had a clearer idea of the person he was. I sipped my wine and felt incredibly fortunate to be able to share such a special moment. Now, I was the one being taken to Zonars by my father. I had not expected to enjoy such a perfect moment in a city that is far from perfect.

While Greece may not always have the startling blue skies from those postcards, maybe I need to understand that Greece is more than that. While it struggles against itself to survive in these harsh climes, I can only home that Greece comes out the other side a better place. It has given me so much and I want more for it, and for its people, for my family.

It may be raining in Greece today, but I’m sure the sun will shine tomorrow.