The 90s, for me, were a time of heady, angst-y, pop culture-y obsession that ranged from Pump-Up-the-Volume era Christian Slater, to Brandon Walsh to Brenda Walsh, back to Brandon Walsh, Leonardo DiCaprio, most people from ER and Pacey (#neverDawson). As I entered my twenties, my obsessions didn’t quite fade away, but they did become more tasteful. And by that, I mean they became French.

Guys, in my twenties, I was a Francophile.


I believed that most things just sounded/tasted/looked better when the French were involved. For this was the time French cinema became (almost) mainstream with Amélie, French music was the only thing worth listening to (Camille! Nouvelle Vague! St Germain!), most of us read or at least owned a copy of Chocolat and French Women Don’t get Fat, and everyone wore black (although being in Melbourne, that was probably just Melbourne). But unlike my other obsessions, I knew I could make France part of my reality. All I had to do was hop on a plane, hop off ninety-seven hours later and be among those I so revered. And while outwardly I spent more hours than was strictly necessary planning this very trip, there was a largish part of me that was extremely intimidated by the prospect of being surrounded by The French. Nevertheless, I put that fear to one side and continued to watch French films on a loop, convinced that they would help improve my year-12-level French, and counted down the days until departure.

And then quite before I was ready (but, in that split-personality way, I was also so completely ready) my sister and I were off on our European Vacation, which included Paris, Aix-en-Provence and other, lesser, non-French, destinations.

But this blog post isn’t about that trip, or the subsequent trip I took to Paris in 2006. It is important, however, to say that France for me then was charming, surprising, confusing, not what I had imagined and exactly what I had imagined. But most of all, it was intimidating. The French were so assured, so beautiful, so stylish and sophisticated. Whether they were being overly-friendly or sneering with contempt, they exuded an other-worldliness that I wished I had, but knew I’d never attain through the sheer fated misery of the lottery of birth.

I don’t think I admitted to myself my complicated feelings towards France and the French for some time, though the fact I didn’t return for ten years says enough.

And so we come to my Parisian sojourn of last week. As my previous blog post attested, those complicated feelings reared their heads and left me excited but cautious about my trip. I worried about not loving the city as much as I wanted to, of having expectations unmet, of something happening to lay waste to my love of all things French.

The morning after our arrival, as the curtains to our hotel room were pushed aside to reveal a gloriously blue sky, we noticed a bit of commotion on the footpath below. Upon further inspection, we realised some training was afoot. What sort of training, I hear you ask? Well, I’d be DELIGHTED to tell you what sort.

If you believed in omens, you’d be fairly convinced at this point that the gods were smiling on you and nothing but good holiday times were ahead.

The good times included: walking along the Seine (one of life’s true joys), a visit to the Château de Fontainbleu (so ornately beautiful and dripping with wealth you can’t help but accept why there was a revolution), the partaking of delicious baguettes, ice-cream, crepes, champagne, rum, steak, frites, croissants and so on.

But I’m not going to lie, I was still very aware of my very French surroundings. So much so that I put extra effort into what I wore, and how I carried myself. I tried to keep the tourist within completely out of sight and my woeful French was a constant source of worry and embarrassment, as was the knowledge that my un-Parisian-ness would be discovered as soon as someone in a shop/restaurant/cultural institution asked me a question in French.

The first night, as we stumbled back to our room after a round of post-dinner cocktails, I flicked on the television and hunted around for something authentically French, and not an American dubbed in French, to watch.

To my utter, utter joy I stumbled across a show that could only be described as the French version of, wait for it, Geordie Shore.

With knowledge of the existence of the French Geordie Shore, day two in Paris was a completely different affair. My shoulders were no longer up around my ears. I happily used my clunky French when I could, and a dazzling smile when I couldn’t. I was dressed in an outfit I had worn countless times in London, and I enjoyed every minute, every second in the French capital.

Yes, there was still a whiff the intimidating every so often – the three French women whose dinner consisted of a shared meat and cheese plate, two bottles of red wine, and a packet of cigarettes each while we indulged in a three-course feast including one of the most delicious cakes I’ve ever eaten – but the city was a joy and all I could think about was when I could make a return visit.

During the second-last day, when there was some downtime between shopping and dinner, I revelled in episode after episode of Les Marseillais and wondered what it would be like to actually live in France. No longer a tourist, no longer a visitor, but as close to an actual Frenchwoman as I was ever likely to become. I was no longer intimidated by the thought, but actually caught myself possibly planning it for my future. Because the French, for all their effortless sophistication, for their chic style, for their overwhelming confidence, also like to kick back in front of the television and watch a bunch of beautifully-enhanced young people get drunk and make out. 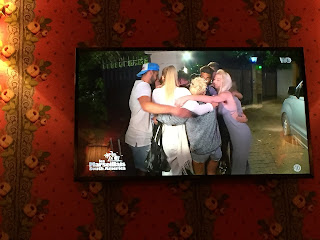