On the healing power of the Sunday roast

January 24, 2017
As we headed out of 2016 and into 2017, a tinge of melancholy haunted my blog posts. I’m not sure if this came through in the reading, but it was definitely how I felt in the writing. The blame for this blue period? A combination of winter and a festive season spent away from my parents (oh and the whole now-that-I've-got-a-job-is-the-London-honeymoon-period-over-? situation of last week). This week I thought it time to snap out of it, put my blues in the rear view. And do you know the perfect way to snap yourself out of the sads? A Sunday roast in a British pub. It’s a reason, in and of itself, to pack up your life and move to the other side of the world.

To walk into a pub on a Sunday afternoon, whether it be a scruffy dive or a gastro-xtravagana, is to know something delicious and comforting and lovely is about to happen (and probably a hangover for Monday morning but let’s skip that part for now). My most recent Sunday pub roast had the added bonus of being a celebration. A cousin from Greece was visiting and what better way to end a perfect weekend than a perfect roast. And so it was I found myself surrounded by friends and family at the Holly Bush in Hampstead.


The Holly Bush is a delight. It’s a grade II listed building tucked away amid the narrow and charming streets of Hampstead. The upstairs dining room was originally the studio of 18th century artist, George Romney, whose artistic muse was Emma Hamilton aka the mistress of Lord Nelson. Oh I do love a bit o’ saucy history with my lunch!

With the pop of a the first prosecco cork echoing around the pub’s old walls, my eyes wandered the menu and were pleased to discover the usual suspects. Although who was I kidding? There was no need to consult the menu. I knew what was for me. It was to be the beef. It’s always the beef. (Yes, yes cue jokes.) And while you may assume the meat is the star of a Sunday pub roast, you would be making an ass out of you and, well, just you.

After a wonderfully short wait, our meals were brought to the table with just the right amount of ceremony, and sitting atop my impressive cut of beef, like a crown, was the glory of the meal.

Because my friends, a Sunday pub roast is nothing NOTHING without a Yorkshire pud. Fact. The lightness, the buttery-ness, the golden glow, the soaking up of gravy-ness… I really can’t do this small but perfectly formed food item justice.

And I could go on singing the praises of this roast in its entirety – the carrots! the potatoes! the range of condiments on the table! – but the memory is wreaking havoc with my taste buds so I’ll move on swiftly to say, the roast did the trick. I left the pub feeling a new woman, the blues firmly in my rear view.

Which brings me to a tangent that I hope you will stay for.

The tangent is the Women’s March that blasted across the world in response to the swearing in of the 45th president of the United States. I was happy, determined, honoured, thrilled and empowered to walk with my fellow p*ssy owners through the streets of London.

Because of the sheer number of people wanting to show support for a cause we should no longer have to protest for, it took us a good hour plus to get out of Grosvenor Square. The ground we’d had to stand on for that hour plus was frozen and the fear of frostbite was very real. But I doubt anyone would have complained if they had had to loose a toe, and I doubt they would have stopped marching if they had.

There were too many moments during 2016 when I felt part of a small minority of people slowly losing ground to those that shouted louder about their hate/intolerance/stupidity. On Saturday, however, I could see that, actually, we aren’t the minority and we have woken up. We have begun to fight back and that gives me hope.

See? Blues, firmly in the rear view. All I needed was a delicious roast and 80,000 of my fellow humans to make me feel like a new woman, and to give me hope for the year to come. 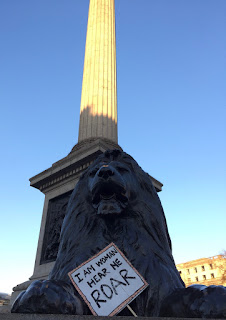