December 21, 2016
The dismalness that was 2016 has been well documented. The terrible events of the year – Brexit, the US Presidential election result, the passing of Bowie/Prince/Alan Rickman, Aleppo, the murder of Jo Cox, to name just the smallest selection of said terribleness – have been well documented in the news, Twitter, Facebook and every conversation, ever. Even while I write this, the horrifying events in Berlin continue to unfold. Yep, 2016 was the worst right up until the end. 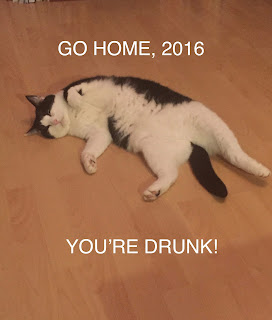 For me, 2016 didn’t suck. In fact, 2016 may go down as one of my favourite ever years. This is so at odds with world events it leaves me feeling confused and guilty. How can I wish for the year to have been longer when, really, I should want it to have ended months ago? How could I want to mentally document every moment of every day when horrors were inflicted on my fellow human to the point where even the headlines could bring me to tears?
Such mixed emotions, I know, won’t be reconciled by midnight on December thirty-first.
But maybe I can try and look back at 2016 and while, yes, remember the horrors, also be proud, not guilty, of what I accomplished. Maybe I can be proud that while the world became insular, I left the country of my birth to open my horizons by settling in a city on the other side of the world. That while fear made too many people vote for those that will possibly make the following years even worse than this one, I decided to push through my own fears and make changes to my life for what has turned out to be the better.
I know I’m looking through the narrowest of lenses, trained on my own experiences of this year, but I hope all you readers out there can also take comfort in the good you achieved this year. Those are the things to focus on as we (thankfully) farewell 2016 and ring in 2017.
And so, as I end my last post for the year, here are more positives that happened over the last twelve months:
LEMONADE
Austrian voters rejected anti-immigration and eurosceptic Norbert Hofer in favour of Greens-backed independent candidate Alexander Van der Bellen as their next President.
JK Rowling brought magic back into the world, TWICE, with Harry Potter and the Cursed Child and Fantastic Beasts and Where to Find Them.
Anything and everything said by Michelle Obama, especially this.
We got one step closer to Sherlock Season 4.
Fracking was officially banned in the state of Victoria.
We were given the gift that was the Gilmore Girls revival.
Giant pandas were removed from the endangered list.
We were also given the gift of Eligible by Curtis Sittenfeld.
UN Women Goodwill Ambassador Emma Watson met Canada’s Prime minister Justin Trudeau and so maybe, just maybe, there are enough good people in this world to make 2017 better.